Here's what I found out when I started to look into linting Markdown content.

Thanks to some great direction and enlightenment from my colleague Tobias, I found myself getting my brain around Markdown linting. Of course, not what it is, but what the current possibilities are and how they might apply to my situation. I thought I'd write some notes on what I found (mostly for my future self).

The Node.js-based DavidAnson/markdownlint is the linter of choice. I'll refer to it as markdownlint in this post.

There's a related project markdownlint/markdownlint which seems to be another, very similar linter written in Ruby. I'll refer to this as mdl as that's what the executable is called.

They both seem to share the same rule definitions which is good; although mdl seems to have rules that have been deprecated in markdownlint.

I went for markdownlint for a number of reasons:

Markdownlint can be installed via npm install or via brew. The brew option is actually via a connected project igorshubovych/markdownlint-cli. I ran the brew install markdownlint-cli command and was up and running pretty much immediately:

From the options we can see that it works in the way we'd expect - point it at one or more files, optionally give it some configuration, and go.

As I mentioned earlier, there is a list of references to mechanisms where you can use markdownlint from the comfort of your editor. This list pointed to fannheyward/coc-markdownlint for Vim.

I don't use Conqueror of Completion (coc) - but I do use the Asynchronous Linting Engine (ALE), which has built-in support for markdownlint. Within 5 minutes and a few tweaks to my ALE related Vim configuration I was up and running. I have to tweak the rule configuration to my liking, as right now, even as I write this post, I'm being given grief by markdownlint about overly long lines. 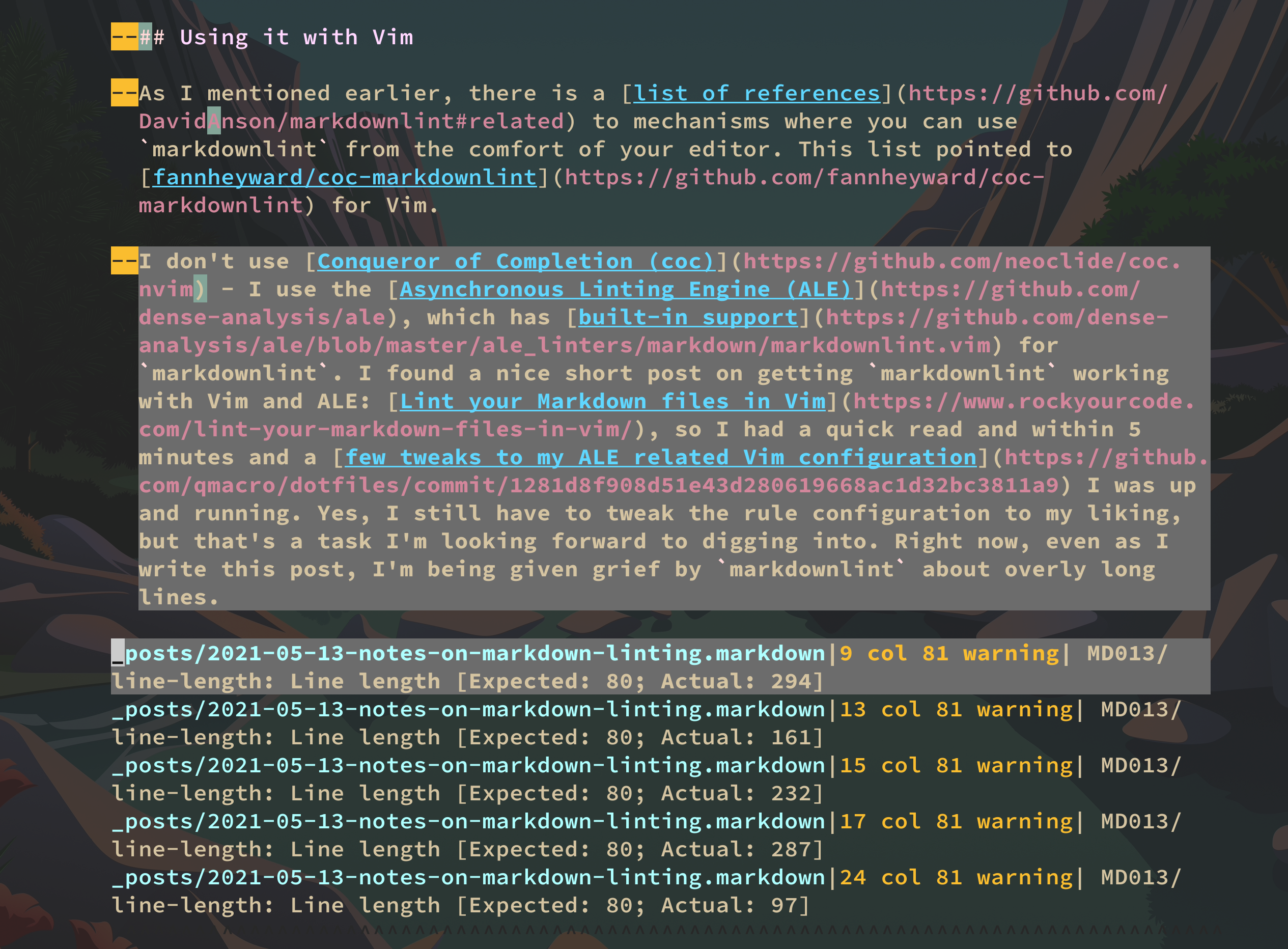 Configuration for markdownlint can be supplied with the --config option, or by configuration files in the right place - either in the current directory or in one's home directory.

I added the following to ~/.markdownlintrc, and the grief about line length went away:

I then wanted to see if I could get the custom linting rule working, at least in a basic way. On the NPM page for markdownlint-rule-titlecase it says:

Sounds fair, although a little worrying for me as I'm not going to be working with Markdown content in the context of a Node.js project any time soon. However, it turns out that I can still install the package and use it, even in a non-Node.js project directory:

The warnings are fair - there isn't a package.json file of course, why would there be?

I do now have a smallish node_modules/ directory, though - containing the custom rule package:

Oh well, I guess I could delete it when I'm done. In the meantime, can I take this new custom rule for a spin?

Yes! Works nicely. Although like I say, I'm not sure why anyone would want to use such a rule ... I may write one that complains if you do use title case. But I digress.

I think I'd like to be able to run these custom rules in Vim too, but I'll leave that for another time. I'm satisfied at least at this stage to be able to lint my Markdown files at all. And the next thing is actually to be able to use markdownlint in a GitHub Actions workflow.

Update: I've written that up in part 2.