More on Markdown linting, this time in the context of GitHub Actions.

Yesterday I wrote up some initial notes on my foray into Markdown linting. Today I continue my journey of learning and discovery by attempting to get the Markdown linting working in a GitHub Action workflow, so I can have the checks done on pull requests.

Beyond creating the workflow definition itself, there are only a few parts to getting Markdown content linted in the context of a pull request:

I've moved from specifying ubuntu-latest to ubuntu-nn.nn for a more stable (or perhaps "predictable") runner experience.

Nothing exciting in this workflow definition so far; I've included both main and master in the list of branches because I've been testing with an older repository that still has master as the default branch.

To run markdownlint on the content of the pull request, we need that in the runner workspace, and the usual use of the standard actions/checkout action does the job here:

Setting up an output association

While the whole process will work without this step, it provides an extra level of comfort for those involved in the pull request review.

The linting is performed in the runner, and the output (from markdownlint) is available in the workflow execution detail:

However, there's a small disconnect between the place of change and discussion (the pull request) and this workflow output.

There's a special, slightly mysterious feature that can help address this disconnection. This is the "matcher" feature, and is mysterious in that it's not particularly prominent in the main GitHub Actions documentation ... although it is explained in the Actions Toolkit documentation, specifically in the ::Commands section.

The general idea is that matchers can be added to a workflow execution. Matchers take the form of configuration that uses a regular expression to pick out parts of output messages and work out which bits are what. In other words, work out which file, line number and column each message applies to, as well as the message code and text.

This is what a matcher looks like, and it's the one I'm using to match the markdownlint output:

The regular expression actually appears slightly more complex than it is, because the backslashes that are used to introduce the metacharacters \d (digit), \s (whitespace) and \w (alphanumeric) are escaped with backslashes in the JSON string value (so e.g. \d becomes \\d). This is so they don't get interpreted as escape characters themselves.

If we stare at the output earlier, we see this:

Applying the regular expression, we can see that it will indeed pick out the values as desired. Taking the last message line as an example, we get:

In this table, the escaping backslashes have been removed, as they're only there to make the JSON string happy. 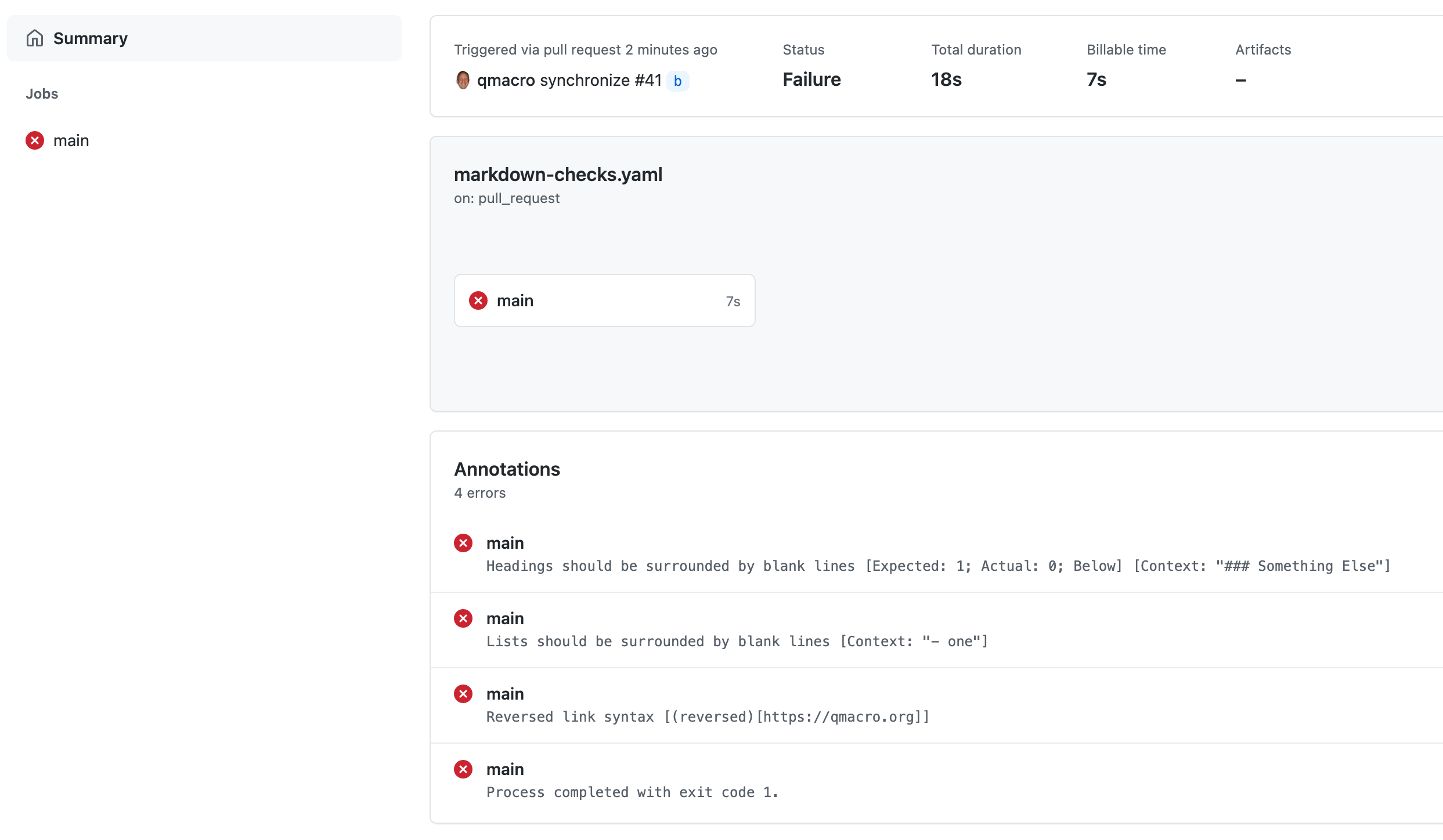 Moreover, each message appears directly below the line to which it applies, like this: 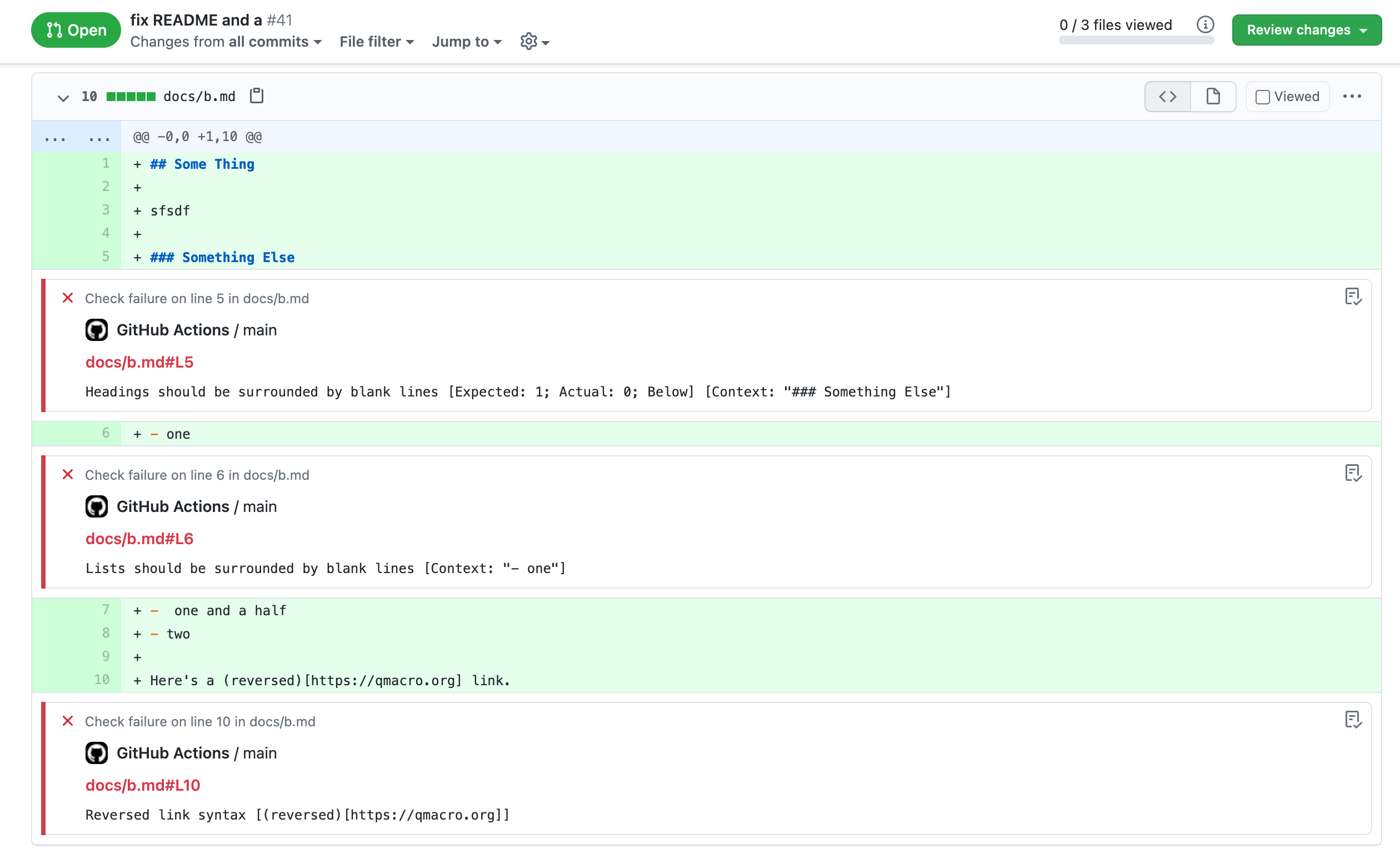 To get this to work, the matcher configuration needs to be added with the add-matcher directive, in a step, like this:

There is actually a GitHub Action, xt0rted/markdownlint-problem-matcher that does this for you, but I'm still in two minds as to whether to use a "black box" action or something direct for things like this. Only time will tell.

Using the --no-package-lock and --no-save options makes for a slightly cleaner environment, given what we're doing here (i.e. we are only really interested in NPM metadata for this current job's execution).

Now everything is ready, we can run the linter. I am invoking the markdownlint tool, just installed with npm, using the npx package runner as it seems the cleanest way to do it:

Without configuration, markdownlint will apply all the rules by default. I don't want that to happen, so I've used the --config option to point to a rules file .qmacro/workflows/markdownlint/config.yaml. This is what's in that file:

In other words, with this configuration, only those rules in that second stanza will be applied. Plus of course the explicit NPM package based title-case rule I've specified with the --rules option.

I've been thinking about where to store workflow related artifacts in a repository. I don't want to use .github/workflows for anything other than actual workflow definition files. So right now, I'm thinking along the lines of a hidden user/organisation based directory name -- .qmacro in this example -- to parallel .github.

The final thing to note in this invocation is that I'm passing a specific directory to be linted: docs/. This means only content there will be linted. I will probably want some sort of .markdownlintignore file at some stage, but for now this will do.

Here's the workflow definition in its entirety:

Everything works nicely, and I'm happy with the local and remote linting process.