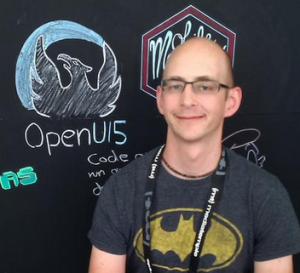 If you’re reading this post, or this whole series, it’s very likely that you already know something about UI5. Whether that’s coming from the SAP enterprise angle with the SAPUI5 flavour, or from the Open Source angle with the OpenUI5 flavour. But there are plenty of other souls out there that are still missing the UI5 salvation :-). And so I thought I’d briefly review the sorts of activities that have been happening over the last couple of years as far as evangelism, education, and advocacy are concerned.

This is very timely, as this year’s OSCON has just finished in Portland, and a couple of UI5 team members Janina Blaesius and Michael Graf were there with a session on OpenUI5 : “No more web app headaches“. Good work folks! OSCON is O’Reilly’s Open Source Convention, a venerable conference that I’ve been lucky enough to attend and speak at on and off since 2001. Last year, I co-presented a tutorial session on OpenUI5 at OSCON with Andreas Kunz and Frederic Berg – two more heroes from the same UI5 team as Janina and Michael.

Not only that, but the great news is that at the EU version of OSCON, taking place in Amsterdam in October this year, there’s another session “Don’t Disconnect Me! The challenges of building offline-enabled web apps” by another mighty UI5 team combo of Christiane Kurz and Matthias Oßwald. Awesome!

And even if you omit the usual suspect conferences such as SAP TechEd, there’s plenty more, far too much to list in this single post. But here’s a quick selection:

In September there’s another SAP Inside Track in Sheffield, where there will be talks on UI5 of course (well, I’m going! ;-) and a whole second day dedicated to learning and hacking with UI5.

I’m sure I’ve missed out some UI5 activities, so please let me know of others that have happened. And perhaps more importantly, let me know of any that are coming up, especially any that you’re planning, and I can add them here. Share & enjoy!