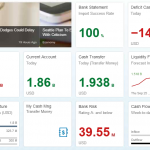 Well hello there folks. This week sees the start (for me) of a week off on holiday, but not before I put out this latest episode of TWIF for a quick roundup of things that caught my eye in the world of Fiori. If you have any stories to share, let me know!

SAP Fiori Application Development in the Cloud by Monika Kaiser & Karl Kessler The subtitle of this article in SAPinsider magazine is “Building, Deploying and Mobilizing Applications for Today’s Enterprises”. And as a great introduction, it certainly delivers on that. Not surprising given Karl’s pedigree in knowing about and writing about SAP technologies :-)

This is very much a getting started article, but where it scores is in the detailed and annotated set of screenshots that are useful for introducing folks to the whole process of building a Fiori app. Not generally, but specifically using SAP’s HANA Cloud tools, including the SAP HANA Cloud Platform, the SAP Web IDE and SAP Mobile Secure.

The article does remind me of the conversation I have with many developers at customers and partners as well as with individuals. It usually starts like this: “Q: Should I use SAP Web IDE as my main editor?” closely followed by “A: Well, it depends …”. There’s a mentality, or a mindset, amongst SAP developers that is hard to shake, because of decades of the same experience.

As ABAP developers, we’ve been used to having to use SE38, SE80, SE24 and the like. Having the tool question pre-answered for us. And many of us have waited on SAP’s every word, even in the dark days when Eclipse was recommended as the development platform. Now we have a choice, but many are looking to SAP for recommendations. And it makes some sense – SAP need to invest in building tools for the army of SAP programmers out there for many reasons. With the SAP Web IDE, they’ve landed with both feet on the ground, in that it’s not unpleasant to use and it comes with great productivity features that Just Work(tm). What’s more, no-one is saying that SAP Web IDE should be your only editor.

Yes, I know that SAP Web IDE is based upon Orion, but you’re not going to convince me that it’s the same thing. I use SAP Web IDE to start some projects off; I’ve even dabbled with the great plugin and templating system (see “SAP Fiori Rapid Prototyping: SAP Web IDE and Google Docs“), and the test offline version (see “SAP Web IDE Local Install – Up and Running“). But I don’t religiously stay with that as my main development environment … for that, I prefer a combination of a local NodeJS based server and the Atom editor right now. Mostly because a lot of the time I’m developing, I’m on the move, with little or no Internet access.

Today we’re in a very nice situation where there are tools from SAP available, and we can choose to use them as much or as little as we see fit. For me that’s a great improvement on earlier periods. Take a look at this article if you haven’t seen the SAP Web IDE yet, and you can make your own mind up.

SAP Web IDE: The Simple Way to Build and Extend SAPUI5 Applications by Yaad Oren While we’re on the subject of the SAP Web IDE, here’s an opportunity to learn more about it specifically from one of the many great folks involved in its development and nurturing.

It’s an hour long video, and includes a presentation from an SAP Web IDE user, PepsiCo.

(I wish SAP would make these videos available on YouTube too – I manage 95% of my viewing activities there, with playlists and “watch later”, and can sit down in front of the TV to catch up. Please, SAP?)

User Experience sessions at SAPPHIRE NOW 2015 by Peter Spielvogel I don’t normally talk much about Sapphire Now, I’m much more interested in SAP’s main annual event – SAP TechEd && d-code :-) But of course, without the business, SAP, primarily a software and platform company that just happens to write business applications, would struggle to survive.

Yes, of course that was a troll, but I make no apologies for saying it. With huge emphasis on the User Experience (UX) you can expect plenty of sessions covering this topic and related topics too. The subtitle to Peter’s blog post is “SAP Screen Personas, Fiori UX, Design Services”. As you can imagine, being a conference focused on the business rather than the technology, on the surface rather than on the mechanics underneath the surface, you’re not going to find much in the way of the toolkit that powers Fiori – UI5. There are a total of 8 sessions that I could find, via the agenda builder, that mentioned SAPUI5. But that’s sort of the point. Much more important are the myriad sessions that Peter lists in his post, covering personalised user experiences with S/4HANA, SAP Screen Personas, SAP Fiori LaunchPad and more.

The UX topic is wide and varied, and while I will continue to loosely categorise SAP Fiori as a strategic approach and SAP Screen Personas as a tactical approach to UX, the fact is that with the LaunchPad becoming the new portal, and with businesses wanting access to more than what the current collection of SAP Fiori apps covers, there will be, for a long time, a hybrid solution to the overall user access and user experience to business data and processes.

What’s important is that we understand where SAP Screen Personas fits in, and with HTML5-based version 3 of the product (with JavaScript scripting support and more), just around the corner for all comers, we can easily imagine a cross-technology approach to all the tools required for a business user to carry out their responsibilities. With judicious use of theming and styling, we could move one step closer to that nirvana of a unified UX.