At SAP TechEd in Madrid this year, I had the privilege of interviewing SAP’s Head of Technology & Innovation Platform (TIP) Marketing,﻿ Aiaz Kazi, on the SAP TechEd Live TV channel. The interview is available here.

His team has an enormous scope, covering Mobile, In-Memory, On-Demand, HANA and more. While the word “Marketing” might be auto-filtered by a techie’s radar-filter, what became clear very quickly is that this group is totally developer focused. His group is already building a brand-new Developer Center (I wrote about this earlier this week) and is focused on helping the developer help themselves. What’s more, the group is staffed with developers. I’ve not managed to find anyone in TIP yet that doesn’t have a developer background. 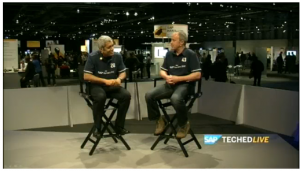 Hasso is reported to have said “developers are the key to success”, and of course, we all know that Developers Are The New Kingmakers. What becomes clear in this interview, is that there’s a re-focus on the developer in the space that spans the distance between mobile and enterprise. This re-focus is long overdue in our industry, so I applaud SAP for having the courage to lead on this. Yes, SAP will benefit because one of the keys to a successful mobile platform is a host of developers in the non traditional-SAP space. But if the message and focus builds, the developer at large will benefit even more.

Perhaps this is a milestone along the way to the upcoming Developer Renaissance?

The interview is here: http://www.sapvirtualevents.com/teched/sessiondetails.aspx?sId=841