I'm having a narrowboat built and am going to live on it and work from it. This post has been a long time coming, and the arrival of the new year has prompted me to start writing about it.

I made the explicit decision some time last year, but I think the decision itself was the culmination of a long time desire to live more simply, combined with the realisation that I'm not getting any younger. I have been intrigued by the tiny house movement in the past, but at the same time the lure of the canal network in the UK has been floating around my periphery for a good while.

Narrowboats and the canal network

For those of you not in the UK, the canals form the majority of the network of inland waterways that played a major role in the industrial revolution in the 19th century, being the main transport routes for goods between towns and cities. Around 2700 miles of canals in the system are connected and internavigable (there are more canals that are separate too); most of them in England and Wales. The majority of the canals on the network can accommodate boats up to around 70 feet (21m) long, and up to about 7 feet (2m) wide (hence the term "narrowboat").

While the original narrowboats -- the ones carrying goods during the industrial revolution -- were drawn by horses along the side of the canal, on the "towpath", most of today's narrowboats are powered either by diesel engines, but there's an increasing interest in hybrid and pure electric propulsion solutions too. And whereas only a small part of the original narrowboats were given over to accommodation (the vast majority of the space being for the cargo), today's narrowboats have all the amenities for living spread along their length - kitchen (galley), living room (saloon), bathroom and bedroom(s). In fact, modern narrowboats have more tech on them than can be found in most bricks-and-mortar houses.

You can find out more about traditional narrowboats in the article Evolution of the Narrow Boat, which includes some great pictures of the traditional designs too.

As I mentioned at the start of this post, I'm having a narrowboat built. There are many ways that folks move onto "the cut" (what folks call the canal, given that the canals were dug out, mostly by hand, from the landscape); buying second-hand, buying the (steel) shell and fitting it out yourself (these are often called "sailaways") or having the shell built and then fitted out professionally. This latter option comes in two forms, either "off the peg" (i.e. you choose a builder that offers a narrowboat size and fit-out in a layout and specification that suits you) or custom, where you get to specify everything from the length of the narrowboat, to the style (more on that shortly), and every detail of the internal layout.

While longer narrowboats offer more living space, there are some canals (or more specificially some locks) that can only accomodate certain narrowboat lengths. As a general rule, any narrowboat with a length of 57 feet or less can pass through all the locks, and therefore navigate the entire network.

After the length decision there's then the style to decide upon. Generally this comes down to three common variations, known as traditional ("trad"), semi-traditional ("semi-trad") and "cruiser". There are some styles that are a mixture of these, but it's easiest to think of just these three styles, and they all basically describe what the back ("stern") of the narrowboat looks like.

As its name implies, a trad most resembles the original narrowboat designs, where there's only a very small standing space at the helm (you steer from the stern), with as much space given over to covered accommodation as possible.

Then there's the semi-trad which looks from the side like a trad, but the rear-most section forms part of the outside of the narrowboat, i.e. there's more outside standing and sitting space for not only the person navigating but also other folks too.

Then there's the cruiser, which has a larger and more open stern, enough to put up a table and chairs when moored. What you gain in space outside is of course lost inside.

Different folks prefer different layouts and it's more or less just a matter of personal choice and use case requirements.

Of course, I'm massively oversimplifying the layouts here; there are also considerations to be made as to engine placement (and indeed traditional engines have their own "engine room" forward of the stern) but this should hopefully give you a general idea.

And while I'm oversimplifying, I will also say that generally there are only a handful of internal layouts, differing by the order in which the different accommodation sections appear along the length of the narrowboat. Traditionally, going from the stern (rear) to the bow (front), you'll get the bedroom first, then the bathroom, then galley and saloon. There's a layout that seems to be more popular these days, which is a "reverse", i.e. galley first, then saloon, then bathroom and finally bedroom at the bow.

I have been in the fortunate position of having the funds (from part of the proceeds of a house sale) to go for the custom option, where I've specified pretty much everything.

I wanted to go for a narrowboat that would not be network-restricted, i.e. of a maximum length of 57 feet and, as is typical, 6 feet 10 inches wide (yes, narrowboats are still measured in feet and inches, so I'll stick to those units).

Having spent time on cruiser style narrowboats and enjoyed the outside space very much, I decided upon a cruiser stern, with plenty of space at the back to put out a couple of camping chairs or similar, plus compartments to store gas canisters (for oven and hob cooking) and more.

For reference, the picture immediately below is that of Queenie, owned by Hester at Star Narrowboat Holidays, moored in Altrincham on the Bridgewater Canal. Queenie has a cruiser stern, and for scale, is 50 feet in length. 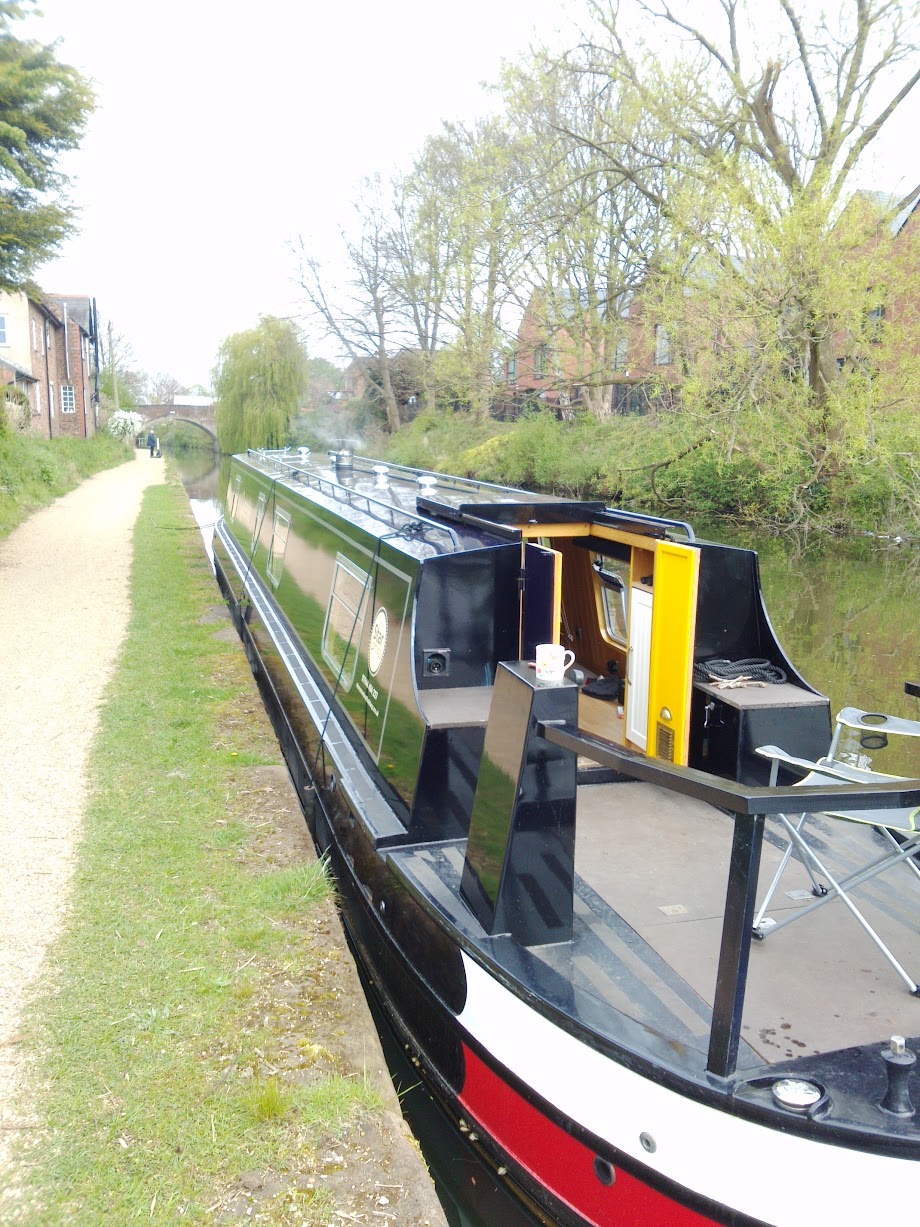 And internally I've gone for a reverse layout, with the steps at the rear leading down into the galley. This was also the layout on the narrowboats I've spent time on before (such as Queenie), and I think it's more practical on the whole, for example being able to pop down to get a cup of tea, or grab something, without having to go through the bedroom first (to be fair, many narrowboats that don't have the reverse internal layout are of the trad or semi-trad design, which features an engine and storage room at the very rear of the internal cabin area, so access to tools and so on is simpler than you might think).

Here's my narrowboat design (open the picture in a new browser window for a larger version):

My research and enquiries had me land at The Fitout Pontoon. And after a great initial phone call, I decided to go with them for the design, an independent step before committing to the next step. I worked with them to finalise a design and specification that I could then take to whatever boat builder I chose.

In the end, because my experience with them in design phase was so positive, I decided to engage them for the entire journey. They would take the design, and deliver the narrowboat according to the specifications. One of the deciding factors was that I got on really well with the proprietor and chief designer Mark, who lives aboard his own narrowboat with his wife and child, and has a huge wealth of experience, knowledge and well-based opinions on everything I could think of, and also on plenty of things I didn't even know that I didn't know.

I'd also already heard great things about them and had followed Chris Mears and his experiences with them on his YouTube channel In Slow Time, specifically in these two playlists:

That distinction afforded by the pair of playlists is an important one. Building narrowboat shells is a different set of skills to fitting out a narrowboat, and The Fitout Pontoon use JSR Boats, a well respected shell builder, to create the steel shell, which they then take and turn into a fully fitted out liveaboard narrowboat.

Where things are right now

The steelwork is done. During the construction, which was at JSR Boats' facility near Northampton, I got a chance to visit and document the progress in photos. In addition, Mark kept me updated with further photos too.

Before I bring this first post to an end, I'll share some of those early pictures, from a couple of months ago in November 2022.

In this one I'm standing at the stern, and you can just see the beautiful "swim" near the bottom of the narrowboat (where the boat tapers to a narrower point), along which the water will flow and out the rear of which will be the propeller shaft and propeller. 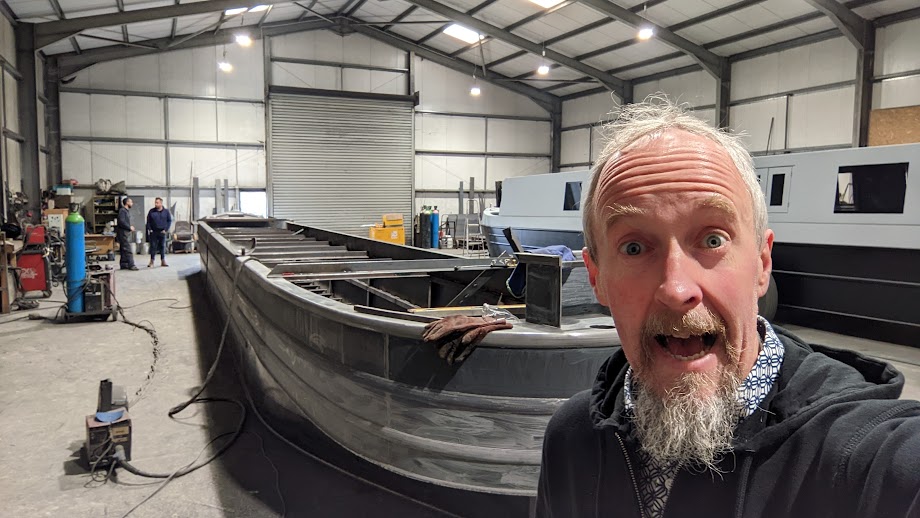 I love this next shot because it really shows that it's hand built; I'm in awe of the skills involved in producing anything like this. Incidentally the steel specifications here are ones typically used for such builds, being "10,6,5,4". These are steel thicknesses in mm, and are for (in order) the base plate, the hull sides, the cabin sides and the roof.

In this third shot you can see the cabin ends, with a space for the double door from the front of the cabin into the bow ... more specifically into the area called the "well deck", underneath which will be the 450l fresh water tank.

In fact, the build has progressed beyond this, but I'll save more pictures and details for the next post.

If there's something you'd like to know, tell me in the comments and I'll try to answer it next time.

Next post in this series: Working from a narrowboat - Internet connectivity.