I've been exploring my Untappd data a bit more since analysing my top brewery countries, this time to see if my average ratings indicated anything about my preferred beer types. Here's what I've done so far, in part 1 of this little series. 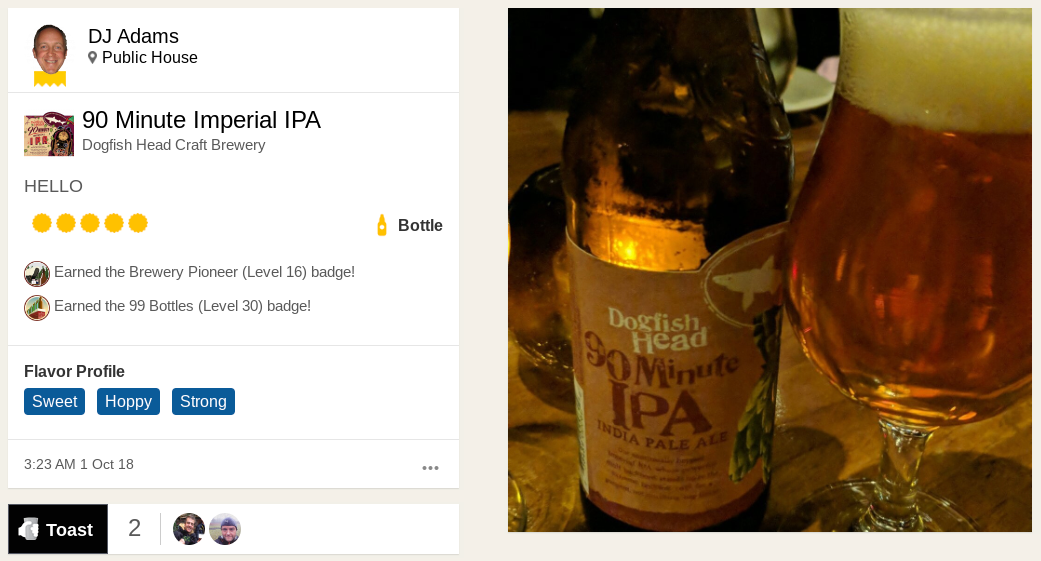 Near the start of the previous post Untappd data with jq - my top brewery countries there's an example of a checkin object; here are some of the properties:

What are the beer types?

I wanted to know how (if at all) my rating was affected by my particular preferences on beer types. I started looking at what types existed in my checkin data. First, how many are we talking about here?

Wow, there are quite a few:

The unique function produces a sorted list as well as removing duplicates.

OK so there are quite a few.

Reducing the number of types

I might be able to be a little less granular if I just take whatever comes before the dash, if there is one. That would, for example, group together all the Bock types, and, for another example, all the IPAs, of which there are quite a few:

As you can see:

So if I call the part before any dash the "major" type, how many of those are there? Hopefully fewer than 177. Let's work it out:

Hold on though, what if a beer_type value doesn't have a dash? What will calling split(" -") do here? Let's see:

(The -n option tells jq to use null as the single input value, effectively telling jq not to expect any JSON to be fed in).

This is what we want to happen.

Note there are two JSON values - a scalar (62) and an array. I wanted the count, as well as all the names of the major types, and that's what was produced, as you can see, from length and . respectively. The interesting thing to note is that in the last part of the filter, both length and . were passed the output from the preceding expression (the output from unique); there was no need for any variable binding or explicit value passing.

That "major type" thing is something I'll likely use again, so it's worth considering creating a function for it.

From now on, I'll stop showing the entire command line invocation (passing the file contents to jq, and specifying the filter in single quotes, also on the command line) and show just the jq expressions instead. That's mostly because I can then get it formatted a little nicer in these posts (with a bit of colour that's sensitive to jq's syntax). I'll create a file untappd.jq to hold the jq expressions, so you just need to imagine that the invocations now look like this:

The function is very simple and just encapsulates what we've done already, which is then replaced with a call to that function:

I wasn't fond of the name "major_type" for the function, so I've come up with the name "category" instead.

That's the end of part 1. It looks like I have a manageable set of major beer types (categories) to use as a basis for this analysis. I've also got the feeling that the jq that I'll end up writing might be more than a few lines' worth, so I'm glad I've made the switch away from a "one-liner" to a file based filter.

In part 2 I look at collecting my ratings across all the checkins, ready for averaging them by category.