I've transcribed an article about the arrival of the "Computer Unit" - a PDP-11/34 - at my school in 1979. The unit became the early focus of a fascination with computing that's never left me.

I went to school in the late 1970s and early 1980s - the dawn of computing for everyone. My very first experience of computing was at a terminal connected to a timesharing minicomputer, rather than at the keyboard of one of the personal computers of the day.

There was an article in the 1979 edition of my school's magazine "The Hulmeian", written by our head of Mathematics Morris Loveland. It brings back many happy memories, and provides some insight into computing in the early days.

Below the article, I've included some pictures accompanied by brief descriptions.

In 1974 the School purchased a single computer terminal, a TEXAS 733, and established the G.P.O. dial-up link to Salford University. This project, initially between School and the University, made available on-line computer time to us and later to other educational establishments. It proved to be a most useful and successful facility and reports have been given in this magazine of some of the work undertaken in the five years in which the link was used. The School had between ten and fifteen hours of on-line time each week, mainly during lunch hours and after school. Some time was available during teaching time and a large number of boys had experience of using the BASIC language to a large remote processor.

Computing was mainly organised for small groups or for individual users, although a certain amount of class teaching was undertaken. The limitations of a single terminal caused delays and frustration. Boys were foreced to wait to use the system and it was found to be extremely difficult to teach a class of thirty boys where the visual display was a single sheet of typed material. Salford University extended the computer facility to several other schools resulting in a considerable reduction in the on-line time available to us.

Early in 1978 it was decided to investigate the possibility of installing a complete on-site computer system at School. The searches took nearly a year and in that time a system which would satisfy the requirements of the School was determined. The financial aspects were agreed in November 1978 and the system was delivered in January 1979.

The computer which has been installed is a SYSTIME 3000 comprising a PDP11/34 processor with 196Kb of working memory, two 4.8Mb disc drives for data storage, three visual display terminals (one of which is used for system control), a Superterm paper printer and the necessary hardware to include the original Texas terminal into the system. Thus four terminals instead of one are available for use with no restriction on the time when a boy may use the computer.

The language used is BASIC PLUS which is a variant of the BASIC language used during the past five years. Very few problems have been experienced with this minor change of language and it is a most suitable language for teaching purposes. BASIC PLUS is interactive, that is, one which enables a two way 'conversation' between user and machine. If an error is made by the user, either in typing or in the logic of what is communicated to the machine, he is informed of that error immediately and can make the required corrections.

The processor and system control is housed in the careers room and is linked by cables running across the quadrangle and over the roof of the Science block to room 34. This room has been redesigned and redecorated to be a terminal room, housing at present the four computer terminals.

The system is a fairly standard computer package apart from one important modification. The signal from one visual display unit is taken and fed to a television monitor. Normally a single terminal is used by an individual or at most by a small group working on a particular project. The intention of having the signal from one terminal displayed on a large television monitor was to enable full classes of thirty boys to see a particular piece of computing. However, one monitor proved insufficient and by including a signal converter and amplifier the signal from one terminal can now be displayed on three domestic television sets. When a full class is taken into the terminal room teaching can be given to all by linking all four terminals together and displaying the data on them and on the three television sets. As far as is known this particular part of the system is an innovation as regards the teaching of computing in schools, particularly as part of the electronics required to convert the signals to be compatible with domestic television sets was designed and built in School.

The system is thus being used in two different ways: for individual and small group activity or with the system linked together for class teaching. So far no examination teaching has been undertaken and at present none is envisaged. The intention is to use the computer in the classroom as a tool to teach a computer language, which will enable boys to undertake projects on their own, and as an aid to enrich and extend the normal teaching of Mathematics. Boys will find that they are taken to the terminal room perhaps for a complete period or for only ten minotes of a Mathematics period during which some particular part of the subject matter being developed will be illustrated using the computer.

The system has been planned with future expansion in mind. When the wiring was installed two extra cables were taken into room 34; and therefore two more terminals can be added to the system fairly easily as and when they are required. Further expansion is possible; up to twenty-four terminals can be serviced by the processor! To achieve this additional memory will have to be added to the processor.

Following the delivery of the system in January 1979 and after all testing had been carried out by the suppliers the computer was in limited use in early March. Since then the number of users has increased considerably. The computer is available for general use from 8.00 am to 5.00 pm and is heavily used by boys from the first to the sixth form before morning school, during the lunch hour and after school. Considerable use has been made during teaching time for class sessions, and sixth formers are able to use the computer in their private study time. During the final three weeks of the summer term about nine hundred log-ins were recorded! As this period included the preparation for the Open Days when the system was out of general use, there appears to be a growing for the facility the computer now provides.

During the summer term three after-school courses were provided to each the BASIC language, two for juniors new to the system and one for those with considerable experience in computing. It is hoped that more of these courses will be provided for boys at all levels in the School in the coming years.

Looking back over the period of the installation of the computer and the enthusiasm it has generated with boys of all ages, I anticipate a growing demand for computer time and an enhancement of the teaching of Mathematics in the School. 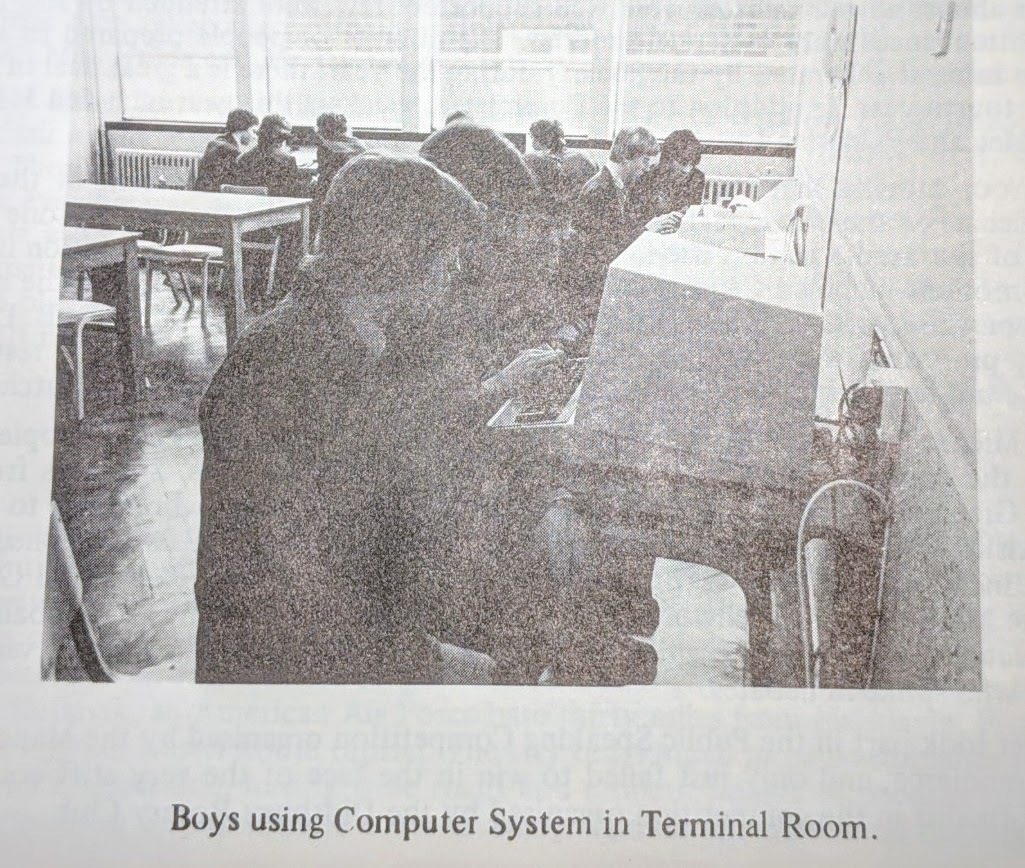 A photo that accompanied the article in the school magazine

Here's a grainy photo that accompanied the article in the school magazine. You can see one of the "VDU" (Visual Display Unit) terminals, and you can see a better picture of one of these in the photo of the Systime unit at the end of this post, but can you also spot the Superterm paper-based terminal (back right)? 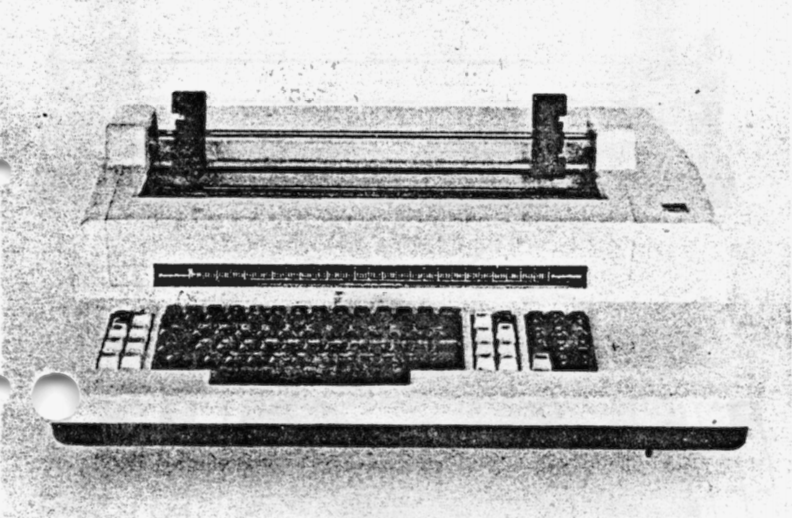 Moreover, furthest away from the camera, there's the original Texas 733 terminal, also paper-based. Here's a better picture of one, from the original brochure. 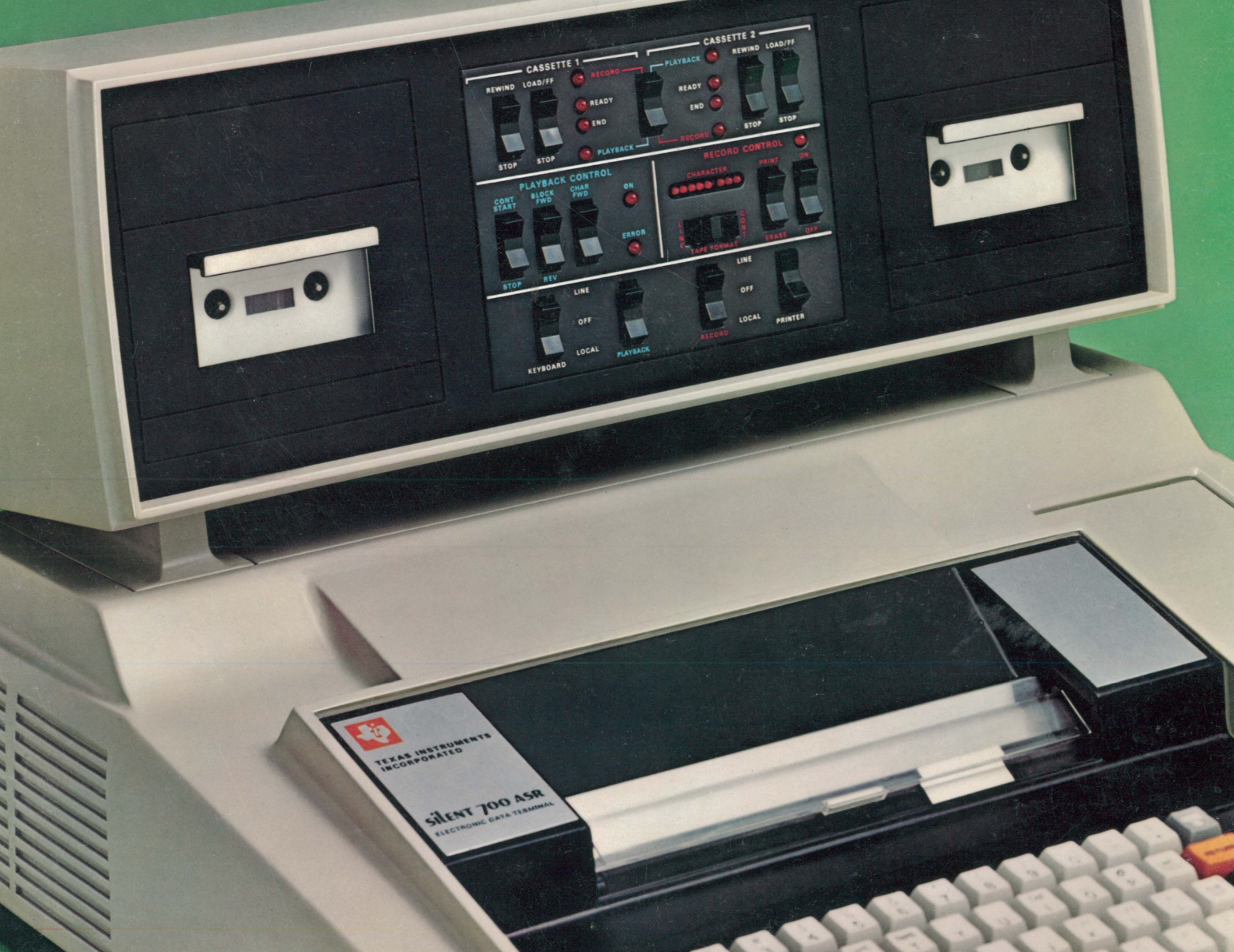 Here's a picture of what the computer unit looked like - it's a photo (courtesy of Computing at Chilton, thank you) of a Systime unit, and the terminal on the desk is the same as those that we had in the computer room. 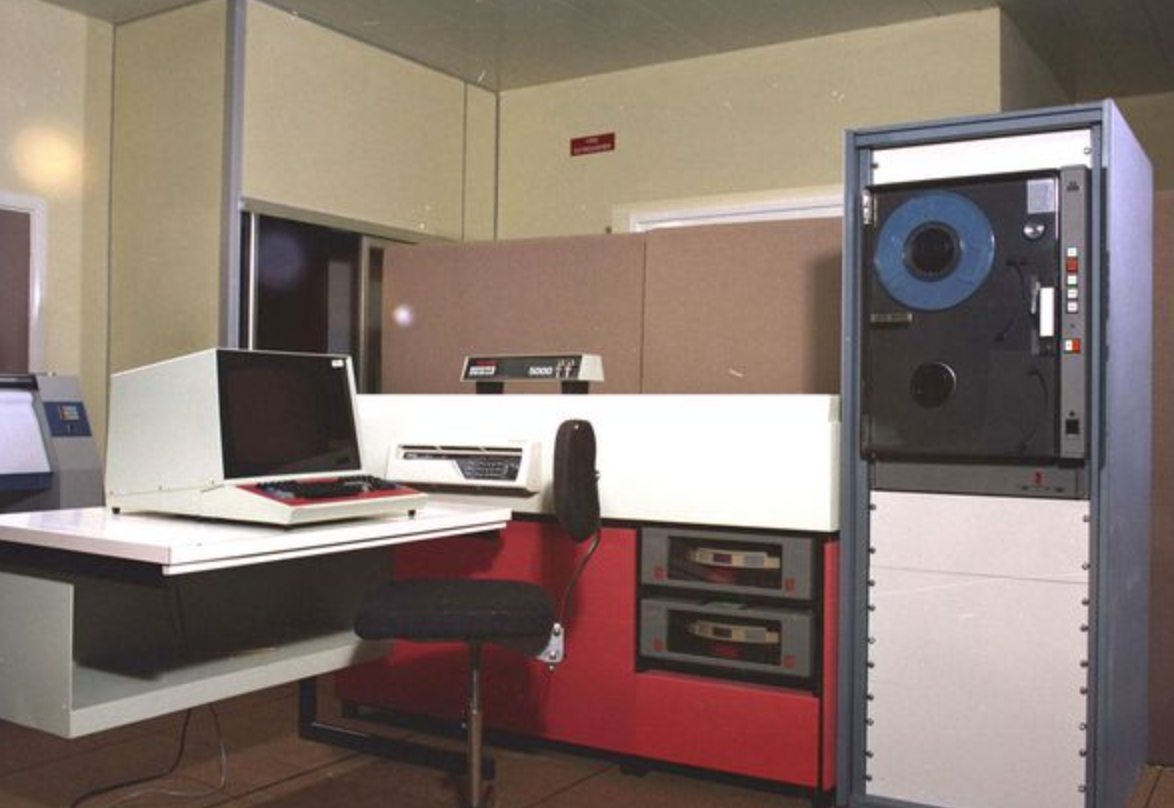