Not too long ago, before Fiori was Fiori, SAP had tried several times to refresh the user experience.  I’m aware of over 20 different UI technologies that we have used since the release of R/3.  As mobility was sweeping into the enterprise, SAP adopted a native mobile development approach.  At the time, many believed that this was an opportunity to create modern experiences with modern UI technologies (primarily iOS at the time) and development environments to refresh the SAP User Experience.

The first mobile apps showed promise, but as we started to roll out more and more, quality suffered.  The experience of some of the native apps were good, some bad.  We noticed a lot of creativity in building different ways to do the same things.  This came to a head when some of our large customers evaluated SAP’s mobile app portfolio as a whole and were not happy about this experience.

Design consistency was one thing.  Also, we considered the full lifecycleof these apps. Currently, there are over a thousand permutations of android software and hardware configurations in the market today.  Even Apple now has several versions of screen sizes and resolutions to support from tablets, phones, and now watches.  Cost of development, support, and ownership pointed to a modern, but scalable approach.  We made a decision to go with a responsive HTML5 approach.

Luckily, SAP had been developing HTML5 controls at that time.  As with other HTML5 libraries at the time, UI5 was separated between the desktop controls and the mobile controls.  We took the decision to combine the best of what we had and create a responsive UI5 control set for Fiori.

I may have understated the part about our customers being unhappy about the user experience.  It was escalated to the highest levels and we were under tremendous pressure to demonstrate to customers that this new concept would fly – quickly.  We had 6 days, 144 hours to be exact, to demonstrate to internal stakeholders the both the desirability and feasibility of our approach.  I’ll never forget Stefan Beck and the UI5 team walking down the halls of Walldorf to our war room saying that, “the UI5 team will support you.” 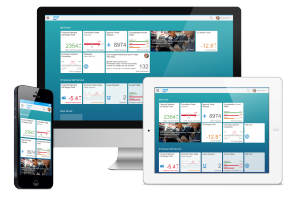 That was the beginning.  Since then UI5 and the team behind the technology have expanded much beyond a mere set of controls.  The team has helped to develop a programming model that is open and designed to scale for the enterprise.  It is part of growing set of tools to make UI development both efficient and scalable both for SAP and the industry.

Looking forward we’ll start to augment our responsive design approach to also leverage native, on-device capabilities.  Analytics will become more of an area of focus.  I have said many times that I feel my role as Chief Design Officer is to change the perception of SAP’s user experience. Fiori has done much for SAP to start that perception change, but I am acutely aware that we are only just beginning on our journey.  I also feel that SAP’s journey is also the same journey that the entire IT industry will need to follow to bring great experiences to our users.