***Update: This has also been published on the Bluefin Solutions website. ***

I was honoured to have been invited to speak at the inaugural SAP Architect & Developer Summit which happened last week (20-21 Nov 2014) in Sydney. It was a fantastic event, mainly due to the people and the content, but also because it hit a sweet spot between different types of SAP developer events.

The summit was the first of its kind to be organised by SAP, and judging from the feedback from the attendees there and then, combined with my own experience, it was a huge success. It was held over a two day period in the centre of a hotbed of SAP architect and developer talent, with folks converging on the wonderful Australian Technology Park in Sydney from all over the region, plus various additions from the UK, USA and elsewhere.

The Australian Technology Park was almost the perfect setting, being based on a centre of technology (heavy transport and industry) from the last millenium, a centre that proudly displayed historical, and some still-working physical artifacts, reminding me a lot of the Museum of Science & Industry back home in Manchester.

Falling directly after SAP TechEd Berlin, firmly within the SAP tech conference season, the summit attracted over 300 attendees. There were a number of reasons for this being a great event to attend – the style was a sweet-spot between different sized events, it was priced well, and the content was just right.

There’s the daddy of all SAP conferences, SAP TechEd && d-code, and then at the other end of the scale there are grass roots community-organised types such as CodeJams and InsideTracks. While the former extends, with the InnoJam pre-event, to more or less a week, and the latter often being single-day affairs, this summit hit the sweet spot in between, finding a great balance between time and content.

This was one of those unusual events where the travel and accommodation costs, even for those relatively local, were more than the event itself. (Because I was speaking, SAP covered my costs – thank you!). This is significant; a price point of AUD 695.00 (around GBP 385.00) combined with the agenda means that it was hard to resist.

The two most important ingredients of course for any event are the people and the content, often going together. Here are just a few of the hands-on workshop items from the agenda:

With those sessions typical of the quality and content, given by those people, you know it’s going to turn out well.

Just as significant as the agenda were the conversations to be had with the amazing folk that were there too. Trying to name them all would be an exercise in futility; suffice it to say that the large majority of what I’m going to call the “ANZ SAP Mob” (in reference to the “Dutch SAP Mafia”) were there, which for me was reason enough to attend. To be able to learn from conversations with these people was priceless.

I was lucky enough to be able to contribute in three ways to this summit.

I gave a keynote at the end of Day 1 (called a “locknote” – who knew?) entitled “Fiori and UI5 Software Logistics, or: Are We in the Future Yet?“.

My aim was to convey the idea that in the SAP development world, we’ve been heretofore shielded from and largely unaware of one of the most important parts of software development – the artifacts.

You could perhaps think of artifacts as the tangible results of our mental machinations, a developer currency that we grow, discuss, exchange and share. And with the advent of Fiori and UI5 development, we should think explicitly about how we should nurture these artifacts to be the best we can make them, and in doing that, embrace tools available outside the traditional SAP developer ecosphere. Tools such as linters, editors, workflow mechanisms and source code control systems. In particular, I focused on git and Github Workflow.

On Day 2 I held a 2 hour hands-on workshop entitled “Learn to Drive Fiori Applications from Underneath and Level Up!“. 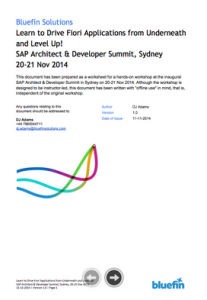 In this workshop I took the attendees (the workshop was fully booked!) through a Fiori application, from underneath, discovering it, controlling it, driving it and modifying it via the Chrome Developer Tools. There was a lot of content to get through but we managed it, not least due to the fact that everyone got on board with the approach and really did a great job in collaborating and keeping up with me. Thanks folks!

When I was preparing the workshop booklet, it took on a life of its own, so much so that it turned into a standalone 48-page mini-publication so that anyone who had it could follow through everything I wanted to teach, even after the workshop. And I’m making that workshop booklet available to everyone so that they can all benefit:

Workshop Booklet: Learn to Drive Fiori Applications from Underneath and Level Up!

If you would like to leave any feedback please go ahead and do that at the end of this post.

On Day 1 there was an Executive Lunch event with folks from all around the Australia and NZ region. I spoke on the new development paradigm that Fiori and UI5 has ushered into the SAP developer world, and gave an impromptu demonstration on UI5 development, building a simple app as they ate their lunch :-)

I hear that SAP ANZ are planning to run this event again next year, which is great. The aim is to attract more attendees, which is also great. But there’s also a balance to be maintained; the synergy, the timing of two full days, the ability to talk to everyone, was, in my opinion, just right.

I’m really hoping that this event has a future, stays roughly true to this inaugural incarnation, and spreads to other areas around the globe. If one came to Europe, I’d sign up immediately and encourage my fellow SAP hackers to do the same.

Well done to all the team for organising this, and thanks to all the superheroes that attended and shared knowledge and experience. We are architects and developers. Learning from one another and sharing with one another is what we do.